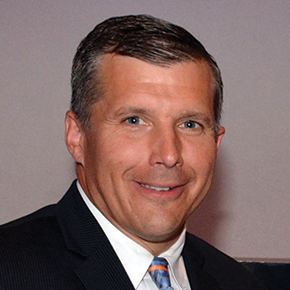 Mark Uyl was named executive director of the Michigan High School Athletic Association in May of 2018, becoming the association’s fifth full time director.  He first joined the MHSAA staff as an assistant director in January of 2004.  During that time he had responsibilities for the administration of several post-season tournaments and oversight of programming and services to the over 10,000 registered game officials at the high school level in Michigan.  He served on the Board of the National Association of Sports Officials (NASO) from 2011-2015, and served as the board chair in 2015.  Currently, he serves as the lone high school representative on the Officiating Development Alliance (ODA), which consists of the supervisor of officials for the NFL, NBA, MLB, NHL, CFL, MLS and NCAA Division I sports.

Lloyd Carr completed his 13-year career as Michigan’s head coach with a thrilling 41-35 victory over No. 9 Florida in the 2008 Capital One Bowl. Carr compiled a 122-40 overall record during his career and led the Wolverines to six 10-win seasons. He guided U-M to the 1997 national championship and five Big Ten Conference crowns.

Carr was a member of the Wolverine football staff for 28 years. Prior to being elevated to the head coaching position, Carr said he thought he held the greatest assistant coaching job in the country, serving 15 years under Schembechler (1980-89) and Gary Moeller (1990-94). Carr joined Schembechler’s staff in 1980 as defensive secondary coach, was the defensive coordinator for eight seasons, and then moved into the position of assistant head coach for five years before becoming head coach in 1995.

Carr guided the school to a bowl game in each of his 13 seasons, with 11 of those appearances coming on New Year’s Day. He became the first Wolverine coach to win four straight bowl games, doing so with victories in the 2001 Citrus Bowl, 2000 Orange Bowl, 1999 Citrus Bowl and 1998 Rose Bowl games. Michigan was ranked in the Associated Press Top 25 for all but 14 of Carr’s 162 career games, including 65 appearances in the Top 10.

In addition to his work on the football field, Carr has been involved in the University, community and coaching fraternity. He has been active in support of women’s athletics, endowing a women’s athletics scholarship that is presented annually to a U-M female student-athlete. He initiated the Women’s Football Academy and U-M Men’s Fantasy Football Experience which donate all proceeds to the University of Michigan Comprehensive Cancer Center. He also served on the NCAA Rules Committee and was a member of the American Football Coaches Association Board of Trustees.

Carr began his coaching career as a high school assistant at Nativity High in Detroit (1968-69) and at Belleville (Mich.) High School from 1970-73. He was head coach at John Glenn High School (Westland, Mich.) from 1973-75, earning Regional Class A Coach of the Year honors in 1975 following an 8-1 season. His collegiate coaching career started with two seasons at Eastern Michigan (1976-77), followed by two seasons at Illinois (1978-79) before arriving at U-M.

Carr is married to the former Laurie McCartney.

Before being named executive director of athletics for DPSCD, Jay Alexander spent 4 years in the non-profit sector.  He served as vice president of operations and development for Big Brothers Big Sisters of Metropolitan Detroit, and manager of philanthropic partnerships for Detroit Police Athletic League.  Most noticeably he helped raise over 17 million for PAL to build their new stadium and headquarters.

His vision is simple: to increase the visibility and recognition of both academic and athletic programs while building good work ethics and developing leaders.  His program’s motto is “First progress, then Success.”  Additional plans include increasing student-athlete participation, building the success of all programs and providing a platform for student-athletes to have fun.  These experiences will result in helping develop the “Whole Child”, to be better prepared, and contributing citizens in a global society.